Language variants and why they’re essential for export success: Chinese

Happy New Year everyone! As we shake off the Christmas cobwebs and get back to our language variants blog series, it seems apt to now focus on Chinese, given that celebrations for the Year of the Rat are fast approaching.

Part of the Sino-Tibetan language family, Chinese has a lot less in common with English than the previous languages that we have covered. The two aspects of the language that may be the most perplexing for non-Chinese speakers are the lack of singulars and plurals – numbers are included in sentences to denote plurality – and the lack of past and future tenses, with time being conveyed using other words, often at the start of a sentence. There is also the regular occurrence of ‘polysemy’, where the same written sign, or character, is used for multiple words that sound different from each other when spoken but have similar meanings. This is certainly not to say that vocabulary is limited across the Chinese-speaking world. The immense size of mainland China alone, combined with the fact that different communities were so isolated from each other before the written language had been stabilised, led to numerous different dialects being formed: present-day China still homes 55 national minorities, each with their own unique spoken variant of Chinese. Unsurprisingly, Mandarin is the most widely-spoken dialect overall.

At this point we ought to tackle a common misconception, one that I myself had before beginning work in the translation industry. Mandarin and Cantonese refer to spoken types of Chinese, but not to any form of written Chinese. The main written variants of the languages are known as Simplified Chinese and Traditional Chinese. We introduced these concepts in our previous blog  a few years ago, and here we aim to elaborate on the differences between the two and emphasise the risk of alienating your target customers if the incorrect variant is used! 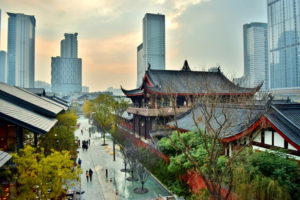 Simplify things for me…

After the formation of the People’s Republic of China in the 1940s, initiatives were set up to unite the country’s various communities and ensure that everyone was speaking the same language both figuratively and literally. This of course included writing in the same language, and come the 1950s, the government decided to simplify the Traditional Chinese written characters, with the aim of improving nationwide literacy. This was how Simplified Chinese was born. The focus was on having fewer pen strokes and therefore simpler characters, so previously-existing basic characters were adopted into this new system whereas other characters were modified or removed all together. ChineseFor.Us explains that if there were two or more characters in Traditional Chinese that shared the same pronunciation, the simplest one was kept for Simplified Chinese and the others were scrapped (we heartily recommend watching their video for a useful visual comparison of these two Chinese variants!).

And yet! While Simplified Chinese is now used in mainland China and Singapore, Traditional Chinese is still the written form of choice for Hong Kong, Taiwan, Malaysia and other territories.

Are you calling my work unsatisfying?

How easy is it to read one of these Chinese variants if you usually use the other? The general consensus is not very. While it is not impossible, it is not instantaneous: ChineseFor.Us points out that, with a few months of practice, a Simplified Chinese writer can become fluent in reading Traditional Chinese texts, yet this is of little comfort to a business who has dynamic web content translated into Traditional Chinese for a mainland Chinese audience. Most readers will not be immediately engaged and will go elsewhere. (Attention also needs to be paid to the use of Traditional Chinese between countries: as our previous blog warns, Traditional Chinese in Hong Kong differs from that in Taiwan. Don’t shoot the messenger.)

To make things extra fun/complicated and to make website content or marketing material extra prone to embarrassing gaffes (please don’t shoot the messenger), Simplified Chinese and Traditional Chinese do use several of the same characters, but some of the characters that they do have in common are used to denote completely contrasting or even unlinked items and ideas between variants, and may also have different grammatical roles in a sentence. These include:

返工
‘To redo or amend something that is not satisfying’ in Simplified Chinese, ‘To go to work’ in Traditional Chinese for Hong Kong

As with the other languages we have so far discussed, tailoring your translation efforts to the precise countries you’re wishing to target is key. Rather than relying on one variant of Chinese, both Simplified and Traditional Chinese may be needed on your website or campaign in order for you to have the biggest impact across the Chinese-speaking world as a whole. Stay tuned for the next blog in our series, where we’ll simultaneously be heading back to Europe and travelling transatlantic…

(Credit goes to Language Trainers, Ethnomed, Tutor Mandarin and ChineseFor.Us for providing useful reading material for this blog, not to mention our great Chinese translators!)