Language variants and why they’re essential for export success: German

To continue our exploration into the many different variants of languages found around the world, we’re now focusing on language number zwei: German. The official language of Germany (unsurprisingly) and Austria, and one of the three official languages in Switzerland, German is believed to have begun its life as far back as 2000 BC. Since then, Deutsch has garnered 90 million native speakers globally, ranking sixth in the world for the number of people who speak the language as a mother tongue. Now that’s a sizeable potential target audience for you!

It is accepted that, as with English, differences in German variants primarily concern the spoken word. You can hear the High German dialect in southern Germany, Austria and Switzerland, listen to Low German in northern Germany or even detect a smattering of Alemannic dialects in Switzerland, western Austria, Liechtenstein and in the French region of Alsace. Despite this rich diversity in speech, written communication across German-speaking countries is more standardised, with High German used in administration, literature, media and many other aspects of society: this standardisation is believed to have commenced in the Middle Ages with the genesis of the printing press and the influence of Martin Luther’s translation of the Bible (we had fun looking at the Encyclopaedia Britannica and Aaron D. Alder’s account of the German language, should you wish to read up too!).

However, just because written German is highly similar across countries does not let you off the hook: it is still not quite a ‘one-size-fits-all’ language. Our translators tell us that not only do articles vary across countries (e.g. ‘der Joghurt’ in Germany is written ‘das Joghurt’ in Austria), but general vocabulary can differ in ways that Germanophones in other countries do not comprehend. Literally. 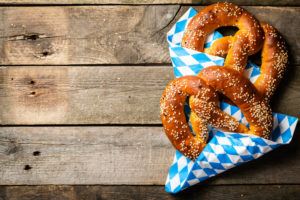 While you may not go swimming often (confused? Read the previous blog on Dutch and you’ll see), daily meals and months of the year are arguably more crucial to convey accurately when it comes to connecting with your customers. When it comes to German, this vocabulary contrasts widely across borders, with some words having different translations for Germany, Switzerland (featuring French influences, perhaps unsurprisingly), AND Austria:

Months of the year

Miscellaneous (i.e. don’t just assume that any word will be the same in every German-speaking country!)

Have a little think: are you wishing to target customers in Switzerland, Austria and elsewhere rather than focusing solely on Germany? If so, make sure your multilingual content is localised accordingly with different versions for all potential markets. Feel free to discuss this with us further and we’ll be back again soon with the next blog in our series.