Language variants and why they’re essential for export success: Arabic

So we’re back after a busy couple of months, thanks for your patience! We’re now ready to keep going on our journey around the world looking at different variants of languages, and today we come to Arabic. As we have seen with Dutch and German, there are notable differences in language use, but on a much larger scale, as we will find out…

A Semitic language dating back to the 6th century BC, Arabic has a staggering 293 million native speakers and 422 million total speakers. Beyond this, the study of the Qur’an makes Arabic the liturgical language of 1.7 billion Muslims worldwide. To top off this list of impressive credentials, Arabic is an official language in 26 countries, not to mention one of the UN’s six official languages. Looking outside the Arabic-speaking world, we also mustn’t neglect the impact that the language has also had on the development of English. While it’s relatively easy to recall examples of Germanic and Latin influences on English, we’ve actually pinched several words – either directly from Arabic or from a Romance language like French or Spanish that had been influenced by Arabic – that are now in common usage today. These words include ‘alcohol’ (don’t ask me why that one was the first off the top of my head), ‘guitar’, ‘cotton’, ‘coffee’…the list goes on. Both languages even share some punctuation rules, despite being read in different directions. However, this is where you should watch out when you receive an Arabic translation from your trusted translation provider (it’s us, right?): while some punctuation marks are shared between the two languages, they can be inverted or reversed in Arabic, like the comma (،) and question mark (؟) respectively. Resist the urge to tweak these at your end in an attempt to proofread, as they’re not mistakes!

Arabic not only has a far-reaching influence but a beautiful richness in vocabulary, even before we get into the variations of the language found in each Arabic-speaking country. There are at least 11 different words for ‘love’: each word conveys a different step in the journey of falling in love, from the first attraction (pronounced ‘hawa’) to all-consuming emotion (‘shaghaf’). The British Council also explains that this abundance of words is not just found in poetic, creative uses of the language but also in everyday life. There are rumoured to be hundreds of words for ‘camel’, the list of which includes ‘Al-Jafool’ for a camel that is easily scared, and ‘Al-Harib’ for a female camel that walks so far ahead of the others that it looks like it’s running away. Talk about attention to detail! 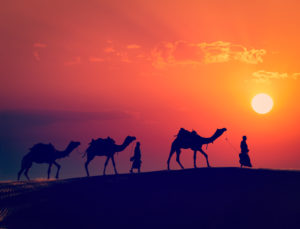 Making a whale out of a fish

Interestingly, native Arabic speakers learn what is essentially two different types of Arabic when growing up: one for writing, and another for speaking. An adapted, modernised form of the ‘Classical’ Arabic found in the Qur’an, Modern Standard Arabic resulted from the need to standardise the Arabic language and unite territories after the Arab conquests, and is the written form of Arabic used in literature, publications, and the media throughout the Arabic-speaking world. However, when it comes to the spoken word, Arabic dialects are not just distinctive from Modern Standard Arabic, but vary vastly between countries, and some even between regions within a single country (for example, there are at least 10 different words for ‘a lot/many’ used across different Arabic-speaking nations. Don’t believe us? Look here). These spoken versions of Arabic have all been influenced by both pre-Islamic dialects and languages from former kingdoms since conquered.

With this in mind, what do you need to think about when it comes to targeting an Arabic-speaking audience? Firstly, it would depend on the material you wish to have localised: if for example you wished to add Arabic subtitles for a social media video that features people in conversation, you should precisely target your Arabic-speaking country of choice with a written version of Arabic that links to the country’s dialect. As warned by Maha on her YouTube channel, speaking Modern Standard Arabic out loud would make someone sound ‘like a professor’, so using this variant of Arabic here might make the tone of the translation jar with that of the original content.

Even when it comes to standard written translations where Modern Standard Arabic would be used, it’s wise to use a translator with knowledge of the particular countries that you wish to target to avoid any unwanted connotations linked to the dialects spoken in those areas. Differences in dialects are perhaps understandably the most evident between Eastern Arabic-speaking regions (Egypt, the Levant and the Gulf) and Western Arabic-speaking countries (Libya, Tunisia, Algeria and Morocco).

Here are some tamer variations found in different versions of Arabic: one translator warned us that ‘some very common words in one dialect are considered very offensive in another’.
عافية

‘Fire‘ in Algeria, ‘Well-being‘ in other Arab countries

‘Bread‘ in Egypt, ‘Rice‘ in other Arab countries

‘Labourer‘ in Morocco, ‘Maid‘ in other Arab countries

‘Fish‘ in Tunisia, ‘Whale‘ in other Arab countries

‘Eggs‘ in Tunisia, ‘Bones‘ in other Arab countries

Regardless of the type of written Arabic translation you require, the influences of spoken Arabic dialects on meaning and understanding cannot be ignored, so make sure that you explain which countries you wish to target with your content when beginning to plan. At Web-Translations we use linguists native to the Arabic country concerned, as this ensures that our clients can reach out to their customers and prospects in the most effective, personal way possible. Again, just reach out if you’d like to discuss this further with us, and stay tuned for the next blog in the series, where we’ll be heading north-east to China, Taiwan and Hong Kong…

(Fancy delving into Arabic further? This blog was created with the help of Langfocus, LearnArabicwithMaha, the BBC and the British Council: they made for very interesting reading/watching!)